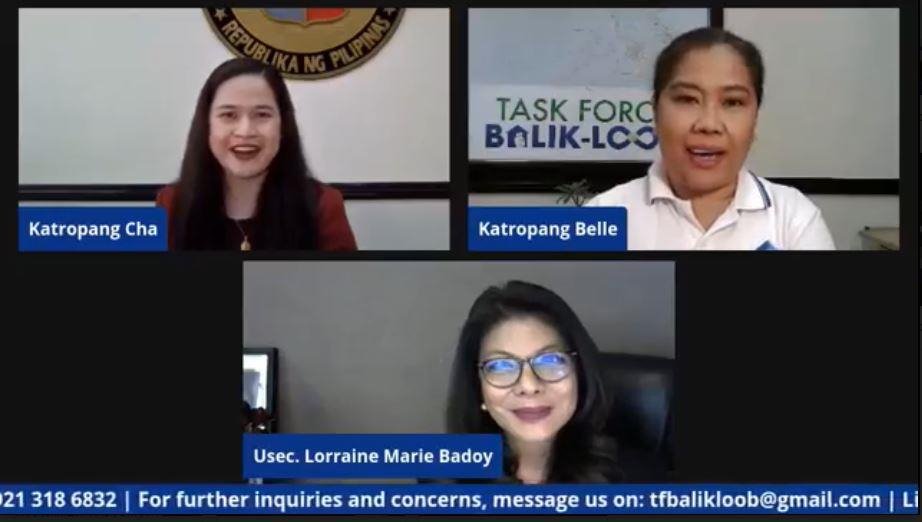 CARING FOR THE YOUTH. Undersecretary Lorraine Marie Badoy openly shared NTF-ELCAC’s advocacy of preventing the recruitment of the youth into armed communist insurgency by providing them with information in a manner that is suited to them, and “using the language” of the millennials and Gen Z.

In her recent guest appearance in the radio-television program of Task Force Balik-Loob, “Balik-Loob sa Pagbabago,” aired over DWDD (1134kHz) AFP Radio and KTVQ2 Cable Channel 107, Undersecretary Badoy shared that apart from implementing the programs that encourage NPA rebels to return to mainstream society and provide government services to far-flung communities, the NTF-ELCAC is also focused on preventing the youth from being recruited by the CTG.

Undersecretary Badoy pointed out that the revelations and testimonies of former rebels (FRs) recruited in their universities, including “Ka Amihan,” “Ka Red” and “Ka Chan-Chan,” who spoke also before the Senate inquiry, must be taken seriously. She also said that that it is incumbent upon the country’s leaders, lawmakers, teachers and parents to open the eyes of the younger generation and let them know about “the real enemy” of the country – insurgency and armed communism.

“If we do not educate our youth and no one would speak the truth about these problems, the future of our nation might be bleak and we would bear the consequence,” Undersecretary Badoy stressed.

Recognizing the kind of intelligence and inquisitiveness of the “millennials and Gen Z,” the NTF-ELCAC spokesperson also expressed her wish for the youth to be effective leaders in the future by ensuring a more peaceful environment for them today.

Aside from being one of the spokespersons of the NTF-ELCAC, Undersecretary Badoy also heads the Strategic Communication Cluster of the national task force. NTF-ELCAC was created under Executive Order Number 70 and mandated to implement a whole-of-nation approach in ending the local communist armed conflict with good governance as its primary guiding principle.