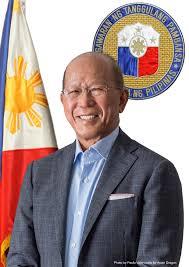 Secretary Lorenzana was born in Midsayap, Cotabato, on 28 October 1948 and raised in the town of Parang, Cotabato where he finished his primary and secondary schooling. After high school, he spent two years at the Notre Dame University in Cobatato City. He entered the Philippine Military Academy in 1969 and graduated in 1973 and was commissioned as a Second Lieutenant in the Philippine Army.

Over the course of 29 years in uniform, Secretary Lorenzana has commanded army infantry units from platoon to Brigade, the Armor Brigade and the Army Special Operations Command. He also served in staff positions at Battalion and Brigade Headquarters, Army Headquarters and General Headquarters. His last posting was as Defense Attaché in Washington DC from 2002 to 2004 where he retired from active military service.

Upon retirement from the military service he was designated as Head, Office of Veterans Affairs at the Philippine Embassy in Washington, D.C. a designation which he held until June 2016. As Head of the Office of Veterans Affairs where he played an important role in lobbying for the passage of two landmark US legislations for the Filipino WW2 veterans: the Filipino Veterans Equity Compensation Fund in 2009 awarding USD265M to surviving WW2 veterans and the conferment of the  Congressional Gold Medal to Filipino WW2 veterans in 2016.

Secretary Lorenzana is married to the former Editha Aguilar from Caloocan City. They have four children and one granddaughter.