NEW HOUSE FOR NEW LIFE. The 17 former rebel recipients of housing assistance from the government through TFBL’s E-CLIP program in a ceremony held on August 9, 2021 at the Almont Inland Resort in Agusan del Norte.

The ceremony, held on 09 August 2021 at the Almont Inland Resort in Butuan, was led by TFBL Chair and Department of National Defense Undersecretary Reynaldo Mapagu and General Manager Marcelino Escalada of the National Housing Authority (NHA).

Each of the 17 former rebels (FRs) received checks amounting to PHP450,000.00 that they can use to purchase a house and lot under the NHA’s housing program.

Usec. Mapagu told the FRs that the housing benefit is only one among the many under the E-CLIP, which are being given to them by the government as a way to help them to enjoy a new life outside of the communist movement. He also asked them to encourage their former comrades to return to the fold of the government.

GM Escalada, on the other hand, reminded the FR recipients to take care of the house that they will build with the money that they received. 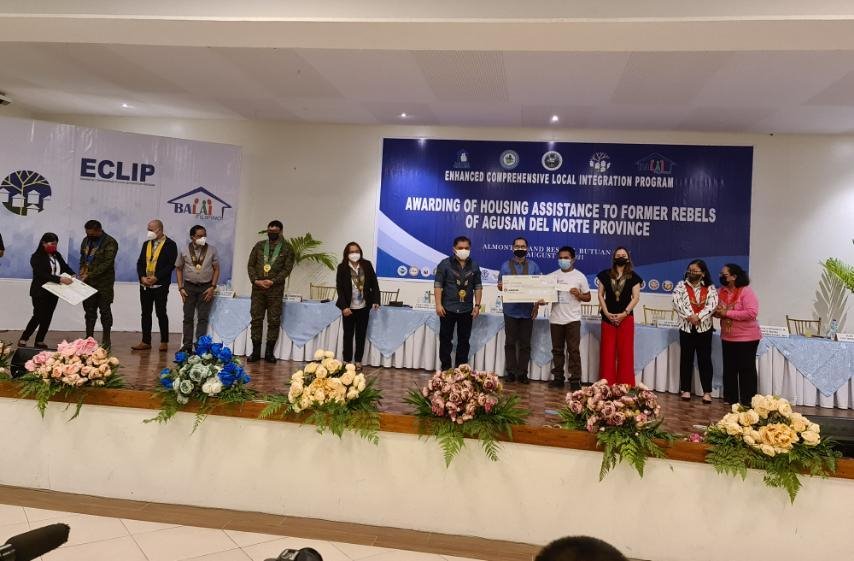 HOUSING ASSISTANCE FOR AGUSAN DEL NORTE FRS. Representatives from the different localities of the province joined Usec. Mapagu (presenting the check) and GM Escalada (6th from right) in the program to award housing assistance to FRs.

Apart from the 17 FRs who were already with their checks, the same housing benefit of 34 other surrendered rebels are already being processed and expected to be granted in a few weeks’ time.