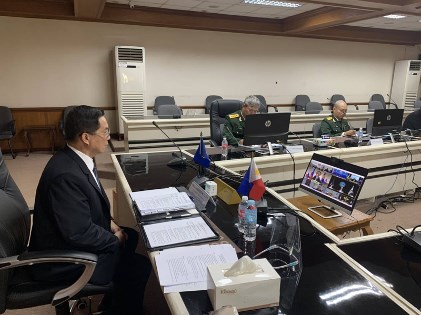 Undersecretary Cardozo Luna listens to the proceedings of the virtual 14th ASEAN Defense Ministers’ Meeting (ADMM) from the Conference Room of the Department of National Defense (DND}, together with Viet Nam Defense Attaché Senior Colonel Luong Van Manh and other officials of the Viet Nam Embassy in the Philippines and the DND.

In keeping with COVID-19 health and safety protocols, this year's ADMM and ADMMPlus were held virtually since their establishment in 2006 and 2010, respectively.

USND Luna congratulated Viet Nam for its successful chairmanship and reaffirmed the Philippines’ continuing support for the ADMM as the highest mechanism for defense dialogue and practical cooperation under the auspices of ASEAN. He also maintained that the ADMM-Plus should remain as the main platform for regional defense engagement towards achieving an open and inclusive regional security architecture with ASEAN at the center.

The 14th ADMM adopted various documents such as the Concept Paper on Developing the Linkage between the ADMM and ASEAN Chiefs of Defence Forces Meeting (ACDFM), co-sponsored by the Philippines and Malaysia, which will promote synergy among defense and military meetings under ASEAN, enable the ACDFM to take stock of all ASEAN military meetings, and inform the ADMM of such initiatives; and the Concept Paper on Enhancing Defence Attaché Posts Among ASEAN Member States, co-sponsored by the Philippines with Thailand, which will promote the role of defense attachés on multilateral defense cooperation under ASEAN. 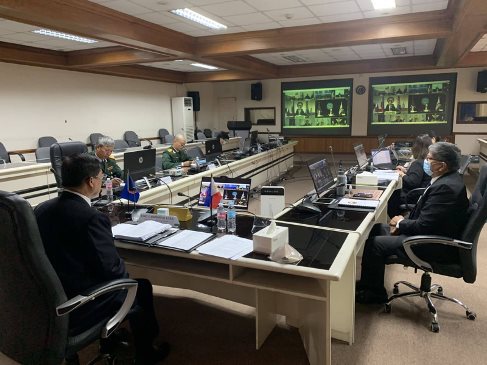 The USND stated that despite the challenges caused by the pandemic, the ADMMPlus should not lose track of other security issues, particularly the situation in the South China Sea and Korean Peninsula, cyber security, terrorism, and disasters. He also echoed the Chairman’s Statement of the 37th ASEAN Summit in calling for non-militarization and selfrestraint in the South China Sea.

The USND also took part in the ADMM’s informal meetings with the defense ministers of the US, China, and Japan, wherein he emphasized the importance of ASEAN centrality, particularly the ASEAN Outlook in the Indo-Pacific. He also attended the virtual commemoration of the 10th anniversary of the ADMM-Plus and the engagement with the Guests of the Chair, which was the first time that such an activity was held with ASEAN’s friends and Dialogue Partners beyond the members of the ADMM-Plus. He also expressed support for Brunei Darussalam’s ASEAN Chairmanship in 2021.